Book 2 in the “Need” or “Privileged Series“:

on June 2, 2017
Format: Paperback
“I really enjoyed this book! The continuing escapades of Corinne Day. With Washington seemingly behind, the adventure continues in NYC. Story-line is fast paced and evolving. Rockwell did an excellent job of making us feel what the characters felt. I’m looking forward to next book in the series.”

To purchase, scroll to end of the Chapter below and click the link, or go to my “Store” tab. 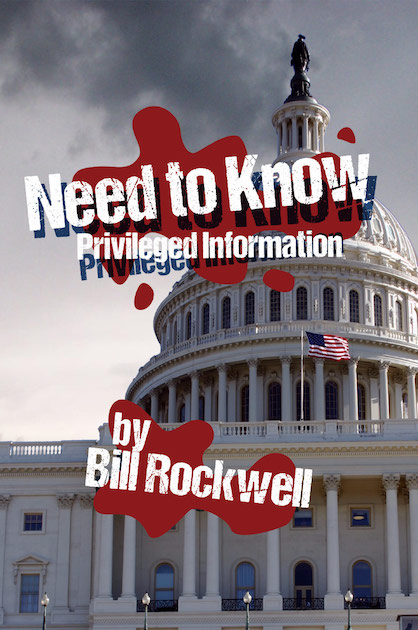 After discovering what she was Not Privileged to Know in Washington, D.C., Corinne Day continues her search for the truth. She soon learns that the conspiracy surrounding her twin’s murder has followed her back to New York City, as she is framed for murder, and multiple attempts are made on her life. Determined to find the truth, and armed with newfound friends, she surges forward, despite all personal cost.

As she feels her way through the lies and violence, Can she survive her quest, or will the forces of evil, set deep within the justice system and the National Political arena, crush her before the truth is revealed?

…Their deeds are corrupt, depraved;not a good man is left…

…All have left the right path, depraved, every one:

there is not a good man left, No, not even one!

Corinne sat on the cot with her head lowered, her glistening, red hair falling to her knees, her eyes focused on the prison bars blocking her exit, but she saw nothing.

I’m totally alone…again! After all of the losses I went through in Washington, including my beloved, murdered twin, Monica, the psychic connection with her that guided me throughout my life, and the loss of my bastard boyfriend, Paul…I should have killed him, not simply wounded him for setting in motion everything negative that happened to me…I wish I had…one would think I’d come home worry free. She looked Heavenward. I thought my troubles were over. She huffed. Over? My life is now shattered worse than any mirror. Some smart nurse I turned out to be! Despite all my background psychology, I didn’t even recognize my own psychological disorder, didn’t see any of the problems facing me then, or now. I might as well have been blind, and now, this! She glanced around her cell, through the bars blocking her exit, and then turned her eyes downward. Hank had been right! I should have stayed in Washington with him, my new, detective boyfriend, or gone into witness protection as he suggested, but no, I had to return to confront those who had deceived me, I had to show the world I am super physical-therapy nurse, Corinne Day, the superwoman who faced, and defeated, the mob! She shook her head. And, of course, I had to do it alone like some big shot. So, look at me now, locked up like a common criminal. Corinne, you’re just plain stupid!

She sniffed. I thought New York would be my refuge, a place of safety among my colleagues. It’s not! I labeled Washington ‘vile,’ with its corrupt politicians and favors bought and sold like cheap wine, but this city has proven it’s just as bad. It deceived me, baited me, and then deserted me! I’m alone, without help, justice, or even one friend, no one to trust, no one to turn to. I’m truly alone…as alone and helpless as I felt when that Senator told me I was ‘Not Privileged to Know’ what Monica had discovered. The bastard knew Monica had uncovered both his duplicity and his criminal activities. He had been the one who eventually murdered her, severing our sisterly psychic connection in an instant….forever! Then, I found myself suddenly and truly alone for the first time in my life. Now, look at me! I’m alone again, no Monica to help me! No friends, no one to turn to. Monica, help me as you did in Washington, guide me, give me strength, and help me choose my path! Monica, My Love, I still need you, all of you. Help me, please! Oh, God, help me, please!

Tears streamed down her cheeks, taking her makeup on an extended journey to the concrete floor.

With a soft knock on the door, the man entered the outer office. He wore a dark blue sport jacket with gray trousers above brown leather loafers. His dark black eyes searched the secretary’s area, but could not find his target.

“Is that you, Corinne?” Dr. Gunther asked from the partially closed door in the adjacent room. “Come on in. I’ve sent Penny down the hall for some patient records. I wasn’t sure exactly when you’d be coming. I heard what happened in Washington. I feel so sorry and also guilty, since I asked you to go there in the first place.”

The man said nothing as he entered the Doctor’s office. Expectantly, he extended his black-leather gloved hand, palm up.

Dr. Gunther smiled. “Oh, I’m sorry. I thought you were someone else. She told my secretary she should be arriving today sometime.” He reached into his desk drawer. “I brought the gun, and I’ve been very careful how I touch it. Don’t want my fingerprints on it. That’s for sure! I left it in the plastic bag the entire trip, and drove carefully too so the police wouldn’t stop me. Can’t be too careful.”

The man took the gun, and removed it from the bag. He removed the empty clip, and, in one fluid motion almost too fast for Dr. Gunther to see, replaced it with another partially loaded one.

“What are you doing?” Dr. Gunther asked, a deep frown now replacing his smile as he leaned forward, bracing his hands on the desk, his mind racing at what might be happening before him. What the heck is going on?

Without a word, the man attached a silencer to the gun, and pointed it at the doctor.

The man fired before the doctor could finish. The doctor grimaced for a brief moment, and then collapsed back into his chair, blood pouring onto his white shirt, and seeping onto his tan jacket. The man then removed the silencer, returned it to his jacket pocket, placed the plastic bag in his other pocket, and approached the doctor’s lifeless body. Without disturbing anything, he checked for a pulse in the Doctor’s neck. None. He smiled. Well done, so far! Boss will be pleased. The man then carefully laid the gun on the floor in front of the doctor’s desk, as he picked up the newly ejected shell casing. He removed another plastic bag from his pocket, removed a shell casing from it, and tossed the casing across the room onto the floor. He then hurried back through the secretary’s area. After checking the hall and finding it empty, he strolled down the hallway toward the elevator.

Spotting Corinne Day as she exited the elevator, he made a quick, sharp turn into the stairway, pulling his cell phone from its belt holster. He quickly dialed 911.

The man spoke in haste, his voice forced deliberately high, and nervous. “There’s been a shooting at General Hospital on the eighth floor…I think the shot came from Dr. Gunther’s office. Better hurry. I’m running for cover in case there’s a terrorist on the loose up here, shooting whoever is around.” He disconnected before the operator could say another word.

The elevator Corinne had entered stopped on every floor as Doctors and Nurses entered, or exited. Corinne bit her lip. This delay is killing me. I’ve been waiting since Washington to confront Dr. Gunther. He better have a good explanation for what he did, or I’m going to kill him, and screw the explanation.

When the elevator door finally opened on the eighth floor, Corinne pushed her way through the small crowd. “Getting off. Excuse me, please.” Frowning, she fixed her hair, placing one curl behind an ear, and patted her yellow blouse as if the other passengers had soiled it. She then checked her black pants. Everything looks Okay, I guess. She shook her head, dislodging the hair she had just fixed. Get ahold of yourself, Corinne. You’re acting like this is your first time in this hospital to see Dr. Gunther, not you thousandth…at least.

She refused to glance at the people still in the elevator as the door closed, preferring instead to march toward Dr. Gunther’s office and her confrontation with the man who had started her on her journey of sadness, terror, and, ultimately, total solitude…without Monica, murdered in cold blood in Washington by an insane Senator. Someone from New York will pay for all that, for all that both Monica and I suffered, and I intend to make Dr. Gunther the first victim of my revenge…unless he has a very good explanation, one that proves he had nothing to do with Monica’s murder. I need proof, as well as that explanation, and I demand it…now!

She knocked on Dr. Gunther’s door, expecting to hear Penny’s voice saying, “Come in.” No response. She tried a second time. No answer. She grabbed the doorknob, and the door opened. No secretary? Unusual, but it’s not unheard of. She must be on break.

“Doctor Gunther? It’s Corinne Day. Can I see you a moment?” Not getting any response, she knocked on the partially opened door to Dr. Gunther’s inner office. She had done this before, finding him sometimes so engrossed in a chart, or busy reading about some obscure disease that he had heard nothing…different distractions, same result: no response. Wonder what has your attention this time, Doctor?

Corinne froze when she saw Dr. Gunther’s body, listing to the right, his head pulling his body preferentially to that side. She stared at his blood soaked shirt. “Oh, my God! Dr. Gunther! What happened?” She rushed to his side, felt his neck for a pulse, but found none. She walked around the desk, wondering what to do next. Do I call 911, or a Code Blue. Code Blue was the hospital’s emergency announcement that would bring multiple doctors and nurses to her spot, ready to resuscitate a dying patient. Too late for that, I’m afraid. He’s dead. Better call police. Wait! What’s that, a gun? The killer left his gun? She knelt on one knee alongside the weapon, started to reach for it, but stopped a few inches from it. She remembered finding the murdered body of Sage, a girl in Washington, a similar gun lying near her dead body. I stopped that bastard Paul from touching it. I’d better take my own advice, and avoid touching this one myself.

“Freeze, Police! Get your hand away from your gun right now. We’ve got you covered.”

Corinne spun on her knee to face the two policemen, standing by the door, guns pointing at her. Oh, no! This is getting to be a habit. “It’s not my gun. I just got here, and found Dr. Gunther dead. I spotted the gun, and had decided to leave it alone when you arrived. Honest.”

“Stop talking, and put your hands up, very slowly, but put them up where we can see them with your fingers spread, and do it now!”