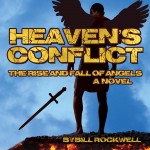 Soon after being created, Lucifer becomes jealous of God’s power and authority.  He then plots to seize God’s Throne.  God assigns the other Archangels to convince Lucifer of his folly, and return him to His Grace.  There follows verbal jousting between formidable Archangels.  Lucifer, seething with evil and desiring to do the seemingly impossible, to destroy God, refuses to repent, however, and forms an army of rebellious Angels.  God then commands the Archangel Michael to lead Heaven’s Angels against Lucifer’s demon army.  The stage is thus set for the most significant confrontation ever with the sovereignty of God’s Throne at stake.

Happy the man who follows not
the counsel of the wicked
Nor walks in the way of sinners,
nor sits in the company of the insolent,
But delights in the law of the Lord
And meditates on His law day and night.
Psalm 1

AT THE EDGE OF HEAVEN,
ABOVE THE ABYSS OF HELL

With a grimace, Lucifer strutted across the battlefield until face-to-face with Michael. Lucifer glared at his fellow Archangel, sputtering as he spoke. “Is that what this represents to you, a personal battle between Michael, the Good Archangel of God, and the Evil Lucifer, former Archangel, now the damned demon, Satan?”
Michael didn’t flinch, nor divert his eyes as he answered without hesitation. “No, not personal. What you’re trying to do here is evil, and my forces…the forces of God…are here to stop you. It’s not personal. Call it whatever you wish. It’s still Good versus Evil, and, if that means me against you, so be it.”
Lucifer screeched as he lunged at Michael…

EARLIER,
BEFORE “IN THE ‘BEGINNING’…”

God turned, and entered His Throne Room. He ascended the stairs, and sat unmoving, His elderly face pensive. With a wave of His left hand, He closed both the Gates of Heaven and the door to His Throne Room, each locking with a distinctive ‘click.’
God gripped the arms of His Throne. He realized His Home would never be the same again. The addition of Angels and hymns would elevate Heaven to new heights of splendor and achievement. It would become a much more elegant place to share with the souls that He planned to garner and purify from within the physical confines of His next creation, the universe containing the planet Earth. However, along with these new creations would come something He had been able to avoid up to now, Evil. After a brief consideration, He decided, as the Dove had said, the resulting circumstances were inevitable. He had really known this for eons, but knew that the right time, the right universe, and the right species to expend His energy, sacrifice, and love upon had finally arrived.
“My will be done.”

Order: Heaven’s Conflict, The Rise and Fall of Heaven:

One thought on “Heaven’s Conflict”